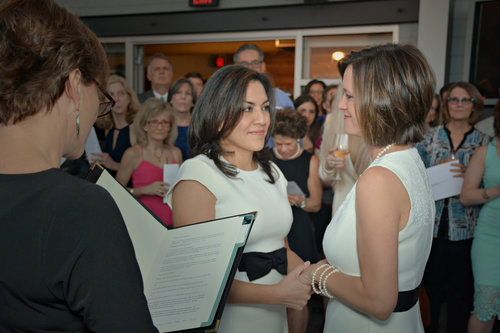 Although the LGBTQ+ community has won some major victories in recent years, there is still a long way to go until all LGBTQ+ Texans can lead full, happy, and healthy lives free from discrimination. Ann and her wife, Sonya, waited for years until they could legally marry. Ann will fight hard to win protections and full equality under the law for the LGBTQ+ community. As your State Representative, Ann will:

Protect LGBTQ+ Texans from discrimination and abuse. Texas is one of 28 states that have no explicit statewide laws protecting their citizens from discrimination on the basis of sexual orientation or gender identity. Ann supports comprehensive nondiscrimination laws that protect LGBTQ+ Texans from unfair treatment in employment, school enrollment, and housing. We must expand hate crime laws to include crimes motivated by bias against gender identity or sexual orientation. And we must outlaw discrimination against potential adoptive or foster parents because of their LGBTQ+ identity.

Codify LGBTQ+ rights in state law. Texas’s state constitution and legal code are still riddled with anti-LGBTQ+ measures such as defining marriage as between a man and a woman and criminalizing homosexuality. Although federal action prevents those measures from taking effect, we should eradicate these hurtful measures by updating our constitution and legal code to reflect Texas values. We must also streamline and simplify the process of changing gender markers on official documents.

Enforce constitutional and federal protections. Texas has a rich and recent history of disregarding or actively undermining LGBTQ+ civil rights rulings by the United States Supreme Court. Our state is still fighting against full implementation of marriage equality – allowing judges to refuse to marry same-gender couples, allowing discrimination against same-gender couples when it comes to marriage benefits, and more. Similarly, it is likely that our state government will work to undermine the rulings in the recent pair of cases holding that LGBTQ+ people are protected from workplace discrimination under the Civil Rights Act of 1964. Ann will fight to have these constitutional and federal rights enshrined in our state constitution as well.

Safeguard LGBTQ+ youth. LGBTQ+ youth, like all children, need protection. We must ban harmful practices such as “conversion therapy” and end the use of Medicaid funds for those practices. We must ensure that public schools allow transgender and gender non-conforming students to use restrooms, locker rooms, and changing facilities that match their gender identity.

Provide comprehensive healthcare for LGBTQ+ Texans. LGBTQ+ Texans face significant obstacles to obtaining full medical care. While broad healthcare reforms such as Medicaid expansion will benefit the LGBTQ+ community, over one-quarter of which is uninsured today, we must go further. Medicaid coverage must be expanded to include trans care, and we must dedicate funding to continue the fight against HIV/AIDS, which disproportionately affects Black and Hispanic Texans today.